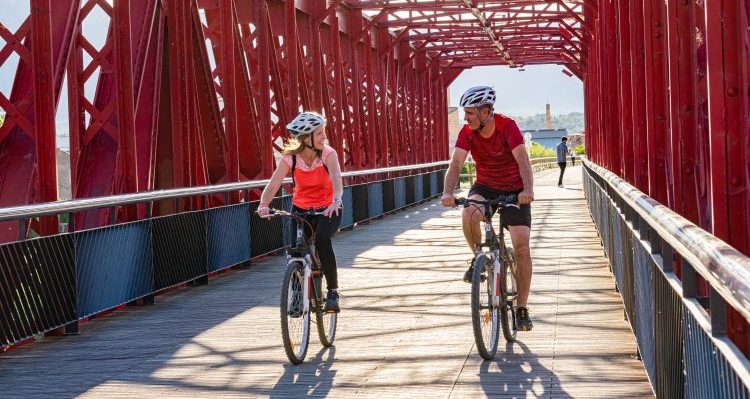 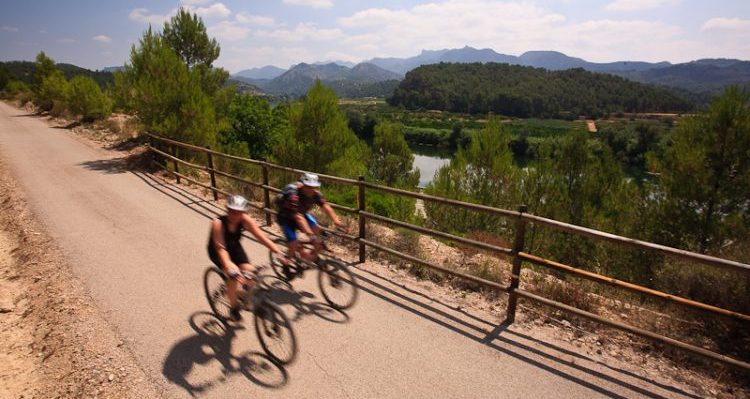 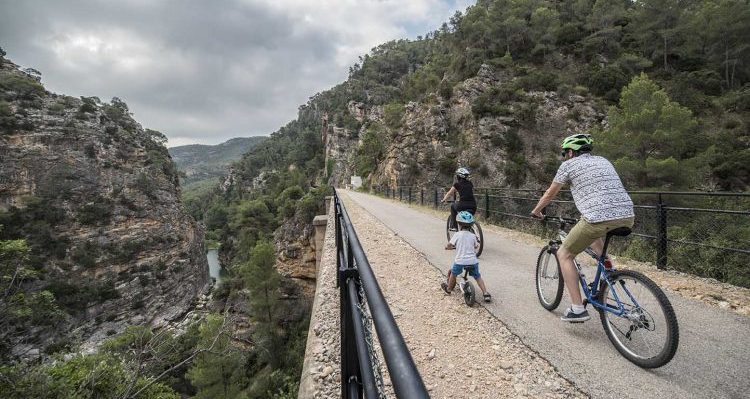 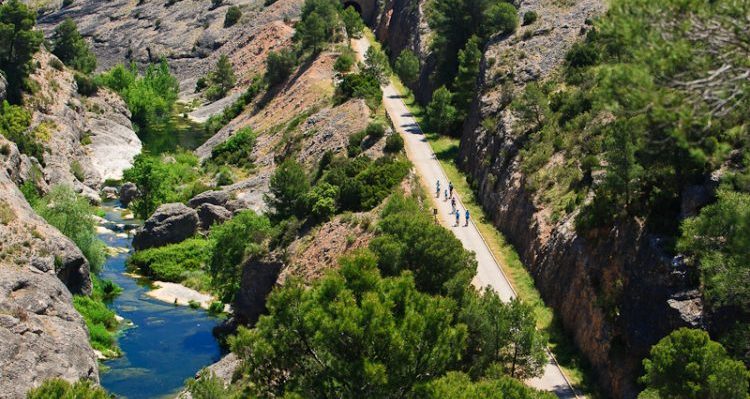 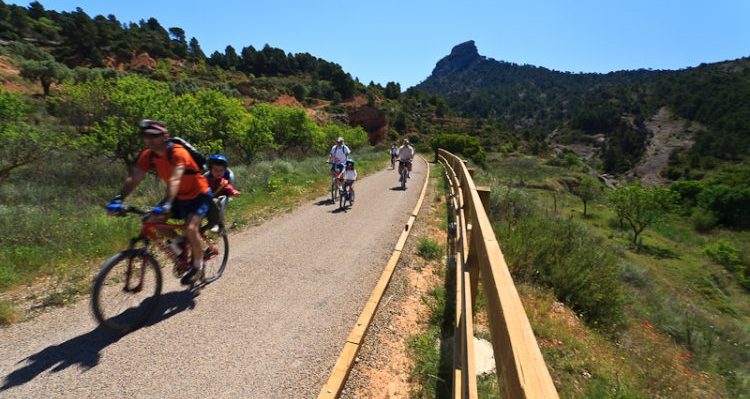 On foot, by bike or on horseback. These are the only three ways of exploring the Via Verda, [Green Way] which begins in Tortosa and ends up in Alcañiz. People of all ages and physical conditions can tackle a section of this beautiful route, which is the perfect place to disconnect and enjoy nature. The Val de Zafán is an old railway track that has been converted into a green route. It starts in Tortosa and passes through the towns of Roquetes, Jesús, Aldover, Xerta and Benifallet, and from there continues through the neighbouring county of Terra Alta towards Pinell de Brai, Prat de Comte, Bot, Horta de Sant Joan and Arnes. It is even possible to carry on to Lledó, a municipality that borders Aragon, and from there to Valderrobres and, finally, to the town of Alcañiz. 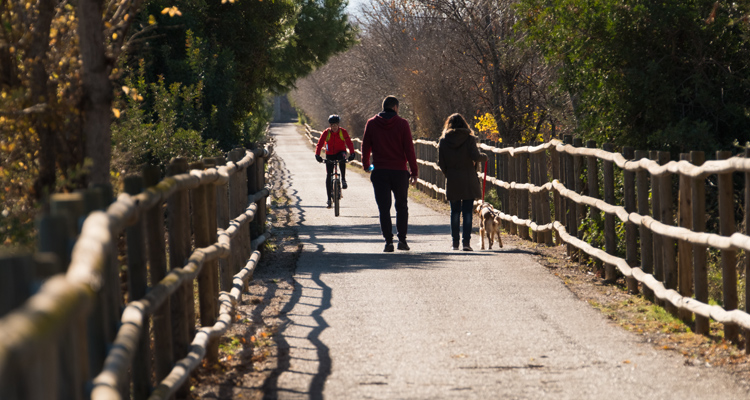 Railway bridge The route begins at the old railway bridge over the Ebro river in Tortosa, the most noteworthy masonry structure on the railway line from Valencia to Tarragona. The bridge opened in 1868 and was rebuilt after the Civil War. It has now been restored and is used as the starting point of the Val de Zafán Via Verda. Of course, many Tortosins also use it every day to cross the city. Soon after starting the route, either on foot or by bicycle, we will cross the neighbourhood of Ferreries before passing through the outskirts of the city and into the countryside.

Roquetes If going by bike, the first stop is Tortosa’s neighbouring town, Roquetes. This is home to the headquarters of the Els Ports Natural Park and the Ebro Observatory, two highly recommended visits.

Jesús Just outside Tortosa is the town of Jesús. While here, it’s worth getting to know this intriguing town, which boasts heritage sites such as the 18-century church of Sant Francesc, the motherhouse of Enric d’Ossó, the house-museum of Maria Rosa Molas, the 14th-century chapel of Sant Bernabé and the Molins del Comte. From here on, the Via Verda is greener than ever and provides the perfect opportunity to bask in the beauty of nature on the banks of the river.

Old Aldover station  The old railway station has been converted into a restaurant, which makes the ideal place to stop and rest. It is also possible to head into the village to explore the neoclassical-style Church of the Nativity, the remains of the old Calvary and the Ebro River Interpretation Centre.

Old Xerta station  This village, which has strong links to the river and nature, boasts attractions such as the Church of the Assumpció and Sant Miquel. The exteriors of stately homes such as Sentís, Rabanals, Pau and Ceremines, which has now been converted into five-star hotel Villa Retiro, are also well worth a visit. Xerta also has a hostel. Continuing along the Via Verda leads to Assut, a medieval structure located in the middle of the Ebro, and the 16th-century mill. This area boasts a recreational area and a viewpoint. A visit to the old Xerta railway station, which currently serves as the Water Interpretation Centre, is highly recommended.

Old Benifallet station  The old station of Benifallet has been converted into a hotel and restaurant. In summer, this privileged spot hosts open-air concerts. The village of Benifallet is 6 km from the station and this requires crossing the C-12 main road. Visits to the spectacular Meravelles Caves, the 17th-century parish church and the 13th-century chapel of Mare de Déu de Dalt or Calvari are recommended. Benifallet is inextricably linked to the river and offers many boat trips.

Old Pinell de Brai station We are now in the Terra Alta [Highland], an area surrounded by nature where visitors can entertain themselves in the tunnels that cross the Green Way. Four hundred metres from Pinell de Brai station, towards Arnes, there is a path on the left that passes by a ceramic factory with a high chimney. Continuing along this road leads to the N-230b road just before the bridge that crosses the Canaletes River, 300 m from the Pinell de Brai station. Six kilometres from the station lies the centre of Pinell de Brai. One cannot possibly visit this town without stopping to contemplate the Modernist-style building that houses the Celler Cooperatiu, one of two so-called “wine cathedrals” in the area (the other being in Gandesa).

Old Prat de Comte station Behind Prat de Compte station lies a path that leads to the Vall de la Jepa interpretation area. From here, we must follow the path and cross the Canaletes River, then take a narrow path on the right. This path, following the streams, leads to the sanctuary of Fontcalda.

Old Bot station Bot offers unbeatable natural landscapes, right in the heart of the Terra Alta. It’s the perfect spot to stop and rest or simply contemplate life and breathe deeply. Right in the middle of the Via Verda, we’ll even come across... an old train wagon converted into a bar! From the front of the station, we have to follow the path that crosses the Canaletes river and leads to the hermitage of Sant Josep, located at the top of a 293m mountain. Approximately halfway, past the river, there is a path on the right that leads to the Forat de la Donzella recreational area, where water springs up from between the rocks in this welcoming spot equipped with tables, barbecues and benches.

Old Horta de Sant Joan station We have arrived at one of the most charming villages in the Terra Alta, where Picasso spent long periods and is said to have discovered Cubism. In front of Horta station, there is a signposted path that leads to the Sant Salvador Convent at the foot of the Santa Bàrbara Mountain. The convent was founded by the Templar Knights and is made up of a group of buildings ranging in age from the 13th to the 17th centuries and arranged around a Renaissance cloister. Muntanya de Santa Bàrbara is 735 m high. It is possible to reach the summit on foot along a small path.

Old Arnes station This is the end of the Catalan Via Verda, in the enchanting village of Arnes, which features a beautiful square that provides the perfect spot to stop and rest. Behind Arnes station there is a path that leads to the TV-3303, at the bottom of the bridge over the Via Verda, where a sign indicates a bathing area in the pools of the Algars river. From there, we can contemplate the imposing concrete bridge that crosses the river and separates the Catalan and Aragonese stretches.

Per la Via Verda 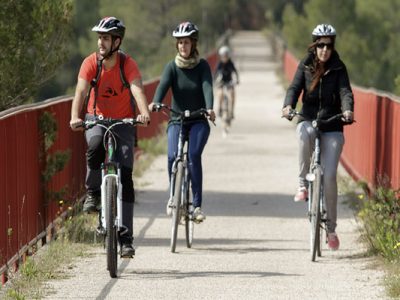 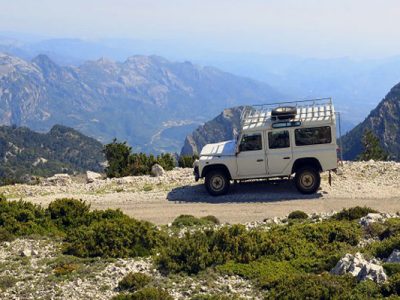